A growing number of states have proposed and passed legislation and clean energy goals to mandate the increased production and use of renewable fuel sources like renewable natural gas (RNG), biomass, wind, solar and other alternative energy sources. These new or proposed state and federal policies include clean fuel standards, clean energy standards, renewable portfolio standards and more.

Policies such as New York’s Climate Leadership and Community Protection Act5 set an emissions-reduction goal of 40% by 2030 and many other states are implementing similar clean energy or renewable portfolio Standards to encourage the development and further use of renewable sources as an alternative to traditional sources of energy. As of 2020, 38 states and the District of Columbia have established an energy standard or renewable goal.

As additional legislation and environmental targets are introduced and target timelines approach, greater urgency will build to ensure compliance among utilities while also accelerating overall demand for renewable natural gas in an already tight market. 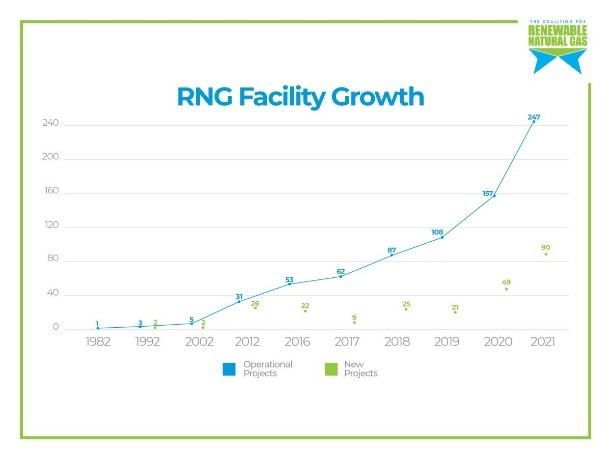 While the number of renewable natural gas plants has grown exponentially6, the renewable natural gas supply is being outpaced by the demand by utilities, corporations and the transportation industry. In 2005, the Renewable Fuel Standard (RFS) was authorized under the Energy Policy Act requiring a certain volume of renewable fuel to replace or reduce the quantity of petroleum-based transportation fuel, heating oil or jet fuel.7 The Energy Independence and Security Act of 2007 (EISA) further amended and expanded the RFS to boost the long-term goals of renewable fuel to 36 billion gallons.

In conjunction with these federal policies, the introduction of additional and expanded emissions legislation and environmental targets will only exacerbate the growing demand for renewable natural gas.